Docker is all the rage nowadays. I am privileged to use it daily, though not on a RasPI. Recently, I was about to give a demo illustrating the span of devices that it supports. The clever Docker Pirates have even made a Raspberry PI kernel complete with a Docker container, so I installed it on a spare SD card. Only to discover that the kernel doesn’t support the new and shiny 7″ touchscreen, leaving my RasPi headless in every respect. (Update: It does now. Support became available the day after… But I hope this post is relevant if you want to run the RasPI headless)

The instructions on the pirate website suggest to use nmap (the port scanner) to find the IP. Even used carefully, it is not  a very popular tool in a corporate IT environment. I could have used it, but risked setting off an alarm somewhere.

I gambled on being able to fix the display in the remaining hours, but…

The journalist was arriving in five minutes, and I had no idea how to SSH to the box so that I could demonstrate the one-line «docker run» command and get a web server running. The helpful guys at corporate IT located the IP-address after I asked for help. But there should be an easier way!

The Interview and demo went fine. But I am no stranger to this situation: I have given a ton of IoT-related demos with Raspberry Pi the last couple of years, and I always had to carry with me a small HDMI display and keyboard/mouse just to obtain the IP address at a new site. 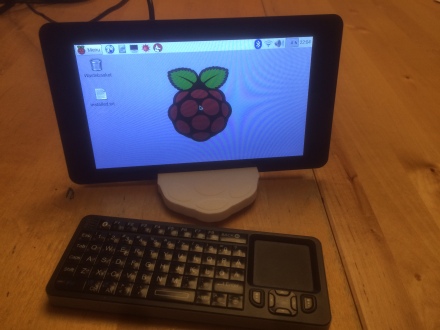 My shiny new RasPI touchscreen. With the docker kernel it was pitch black!

I could make a script that sends the IP address as an email, no? Well. I don’t like to leave my username and password on the PI. Neither do I want to have the mailbox spammed with IP addresses.

MQTT to the rescue!  MQTT is a IoT-friendly protocol with a lightweight footprint. The clue here is to use a public MQTT broker – in my case mqttdashboard.com – so that both the RasPi and my mac could reach it.

I found a rather decent solution by San Bergman where he solves the trickery of getting the IP address for an interface and mails it. So I changed it to use MQTT:

1. Install Mosquitto on your Raspi and PC/Mac

Mosquitto is an obvious choice here, with excellent community support.

On the PI it is pretty easy:

To get clients for Mac and PC, please refer to the instructions on the mosquitto website

2. Make a script that posts the IP address to MQTT

First, test and select  a public MQTT broker that you can reach from both the PI and your laptop.

Remember to make it executable:

3. Make it run when the RasPI boots

The /etc/rc.local script allows you to insert commands that run after a reboot. I added three lines at the end, so that it reports the address of the interfaces that I can think of. Remember to use «sudo» when you edit it..

Having installed the Mosquitto client, do the following from your PC/mac before you power the RasPI:

NB! Of course you have to replace the topic with whatever you chose in the script

Voila! I no more need to drag a keyboard and mouse around for demos. This small hack really illustrates the versatility of the MQTT protocol